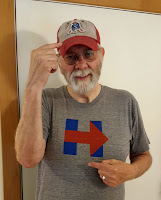 Why am I voting for Hillary Clinton on Nov. 8th? It is the same reason I choose an auto shop that has the experience and reputation to service my cars at a fair price. It is the same reason I choose a health center and doctor with the experience and reputation to meet my health care needs. I am not voting for Hillary because of her gender. Having been the wife of the governor of Arkansas,  the wife of the President of the United States, United States senator for 8 years and Secretary of State for 4 years she has the most experience of anyone who has run for President in modern times.
I always find it interesting that people will vote for anyone who is proud that they have no experience in government. We don't go to the mechanic that advertises they have no experience about repairing cars or the person who want to be your doctor and is proud they have no experience in medicine.
I am not voting 3rd party as a protest because I did that in 2000, I voted for Ralph Nader and regret it. I voted to protest the Democrats move to the center under Bill Clinton. I figured that voting for Nader in Massachusetts would not help elect George Bush, but it did not help Al Gore either. Today I think about how different our country would be if Gore had won.
I am not voting for Gary Johnson because the Libertarians are the party of I got mine and good luck getting yours. They are the party of economic Darwinism.
As far as the Green Party goes, it is a good idea that is gong nowhere. The Greens need to spend several years building a base in local and state legislatures.
Hillary is not without flaws and I disagree with some of her past choices and policies, but that is true for anyone who is in public service.
If you are dissatisfied with local, state of federal governments you need to get involved in making the changes. That is why I have joined Progressive Democrats of American (PDA) and my town Democratic Committee. The people who run your town/city and state governments make a big difference in you life.
Posted by myvls.com at 1:44 PM